The Power of One

The Power of One

A Message from our President/CEO

C.F .Sharp is at the top of the manning industry for one simple reason.

We treat people with respect and dignity. Our business is relationship driven, and our family values drive our culture of quality.

C.F. Sharp Crew Management aims to be the preferred supplier of Seafarers to the global Maritime industry. We intend to generate the highest possible yield for our stakeholders, and we plan to achieve this via recruitment and maintenance of skilled and motivated employees, utilization of the most up-to-date and advanced technology. We focus on quality, health, safety and the environment with integrity, in all parts of our organization.

We pioneered and supported the growth of Filipino manning which today is considered as the major source of seafarers to international shipping.

When it comes to quality of our service, compromise is not an option. To understand the service provided by CFSharp Crew Management, it is important to be aware of the CFSharp Group’s history that spans decades of corporate transformations and huge expansions. 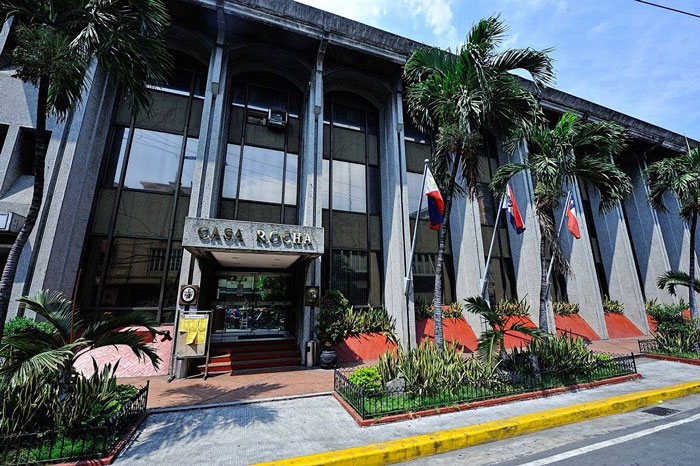 It was on November 23, 1937, Antonio V. Rocha, President of the Manila Shipping Company and Chester F. Sharp, the General Agent for States Steamship Company in Manila embarked on a partnership by forming a company that was to become one of the country’s enduring and leading corporations in the maritime industry. It was their entrepreneurial flair that helped set the foundation for the modern company that exists today.

C.F. Sharp & Company started out handling sugar export shipments., from which the famous “Sugarcraft Manila” cable address evolved. The company expanded within the Philippines and Southeast Asia, establishing itself as the leading shipping agency in the region.

As the company’s reputation grew, the scope of its business expanded. In 1952 Sharp Travel Service wasestablished. Shortly thereafter, in 1953, C.F. Sharp Singapore with other offices throughout the region were opened.

With the post-World War global industrialization, the world economy began to flourish.– a turning point in C.F. Sharp history. As the world was rebuilding, it opened a huge demand for manpower. C.F. Sharp entered this new era when, in 1963, the company first hired and deployed Filipino seafarers to a foreign-flagged vessel. This paved the way for a new directional diversion towards crewing activities. It was in the 80’s when C.F. Sharp & Company Pte Ltd was established and an international Marketing Office based in the United Kingdom. The expansion of C.F. Sharp continued with the establishment of new companies whose services were designed to complement its core businesses. From C.F. Sharp’s modest beginning in 1937, it has now become a maritime conglomerate on the strength of its vision and enterprising spirit.

Seafarers from the South need not travel to Manila. Applicants and ex-crew alike visit the Cebu office for submission of applications, processing of crew contracts . We have also established a network of accredited clinics and training centers to assist the seafarers us in the process of facilitating crew deployment requirements. 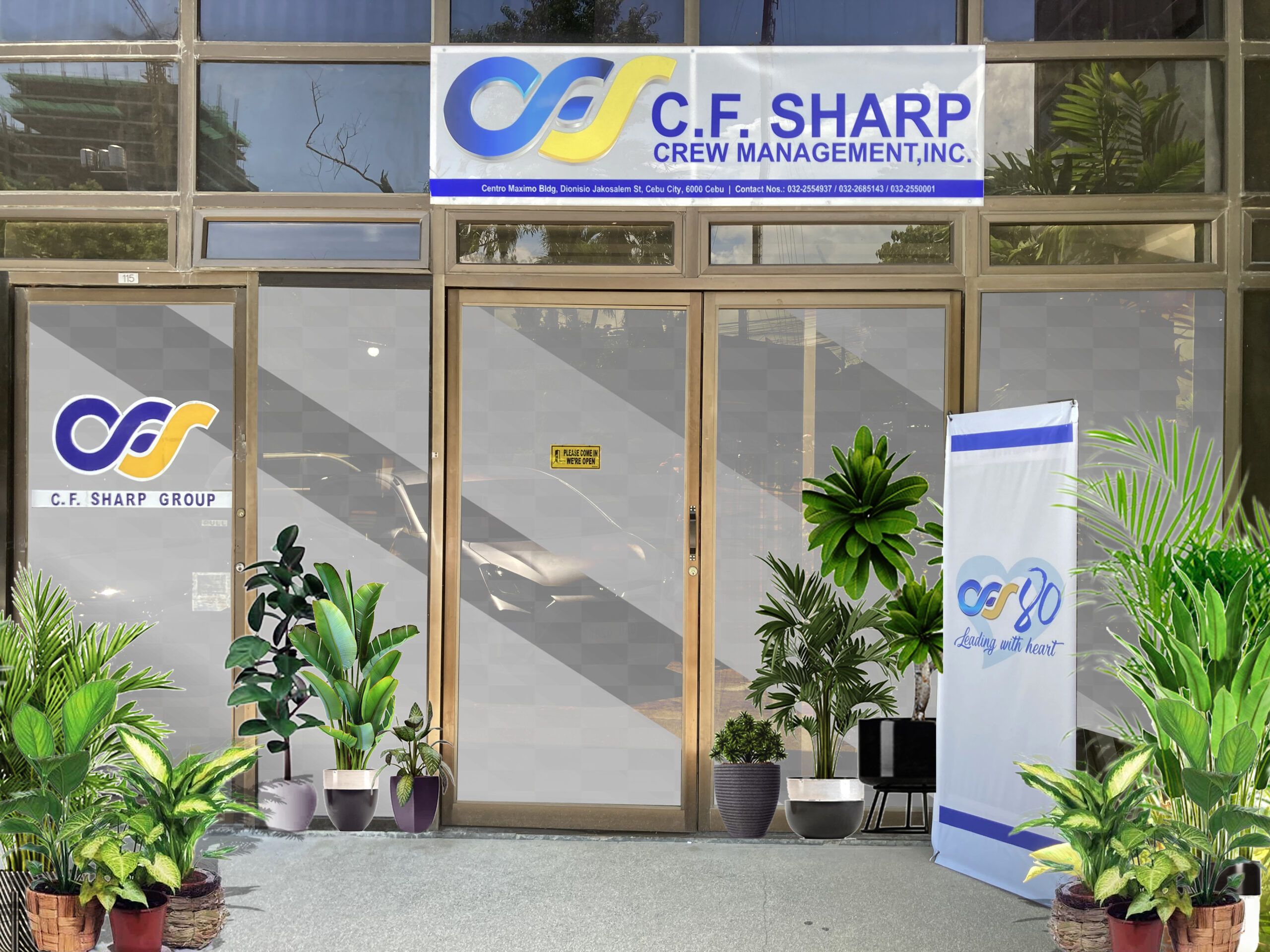 We supply just every position there is, onboard ships, both on the marine side and the hotel side. Our Filipino seafarers bring their values with them. Hard work, loyalty, competency, extra mile, in service.

The kind of seafarers we send onboard make us outstanding, most recognized, respected name in Filipino manning.

We provide equal opportunity in the development and advancement of our seafarers. We believe that our seafarers are our partners in growth and stability. We not only develop people and skills, more so assist them in establishing successful careers onboard. 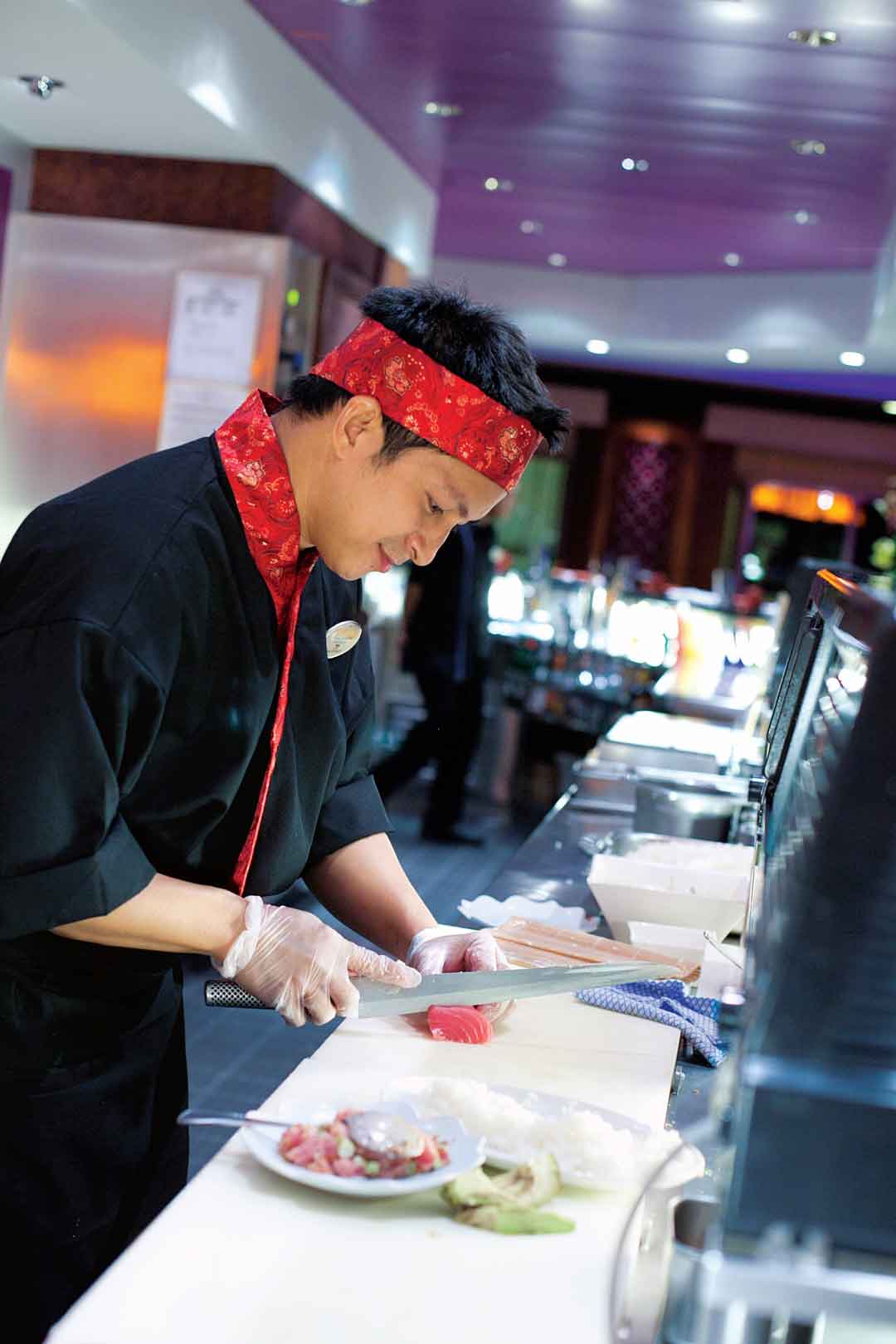 I started my first contract with C.F. Sharp on Aug. 2, 2001 and joined a tanker ship and was promoted to A/B on my second contract then eventually to a P/Man.

Up to this day and the past 14 years working in C.F. Sharp, I am grateful for the opportunity the company has given me despite my lack of experience on my first contract. They gave me a good salary to support my family’s needs. The working environment was great. From the managers to the staff, their dedication to service were unquestionable!

I’ve been working for CF Sharp for quite a number of years, the staff has always been very supportive, approachable and seafarer friendly.

In crunch time CF Sharp always comes up with an excellent solution, thus making seafarers task a lot more easier during their time on and off. 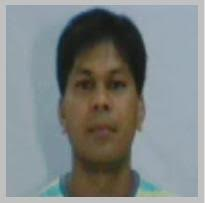 From its modest beginning, CF Sharp Crew Management has now become a maritime conglomerate on the strength of its vision and enterprising spirit. The company pioneered and supported the growth of Filipino manning which today is considered as the major source of seafarers to international shipping.

CF Sharp Crew Management promotes and nurtures core values of service excellence, discipline, honesty and loyalty. It provides equal opportunity in the development and advancement of thousands of Filipino seafarers. The company not only develops people and skills, but moreso, assists them in establishing successful careers onboard.

CF Sharp Crew Management’s mission has never been to be the biggest but to be the best. Along with the cooperation and partnership of its distinguished principals, the company plays a leading role in the development of the Filipino seafarer market. 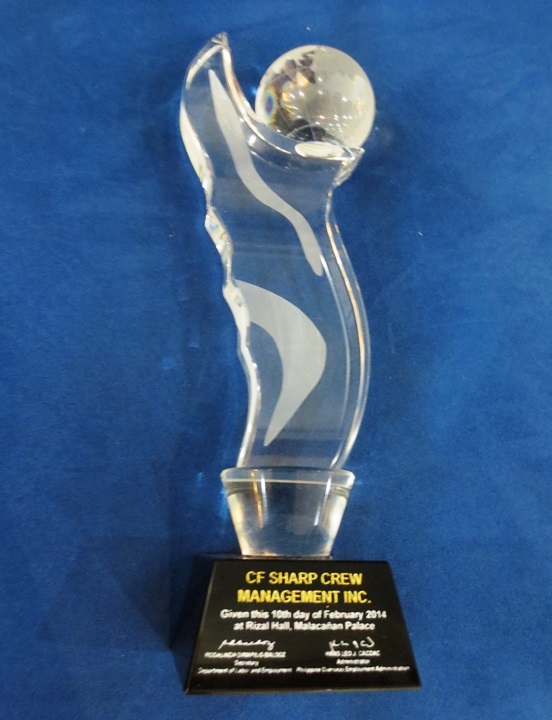 In 1995, the company’s Quality Management System has been certified compliant to ISO 9000 standards. C.F. Sharp Crew Management. is the first Philippine manning company to achieve this feat. In April 2001, further demonstrating our commitment in providing quality service, we were given another certification by DNV for our compliance to the Rules for Crewing Manning Offices (RCMO). The RCMO contains specific provisions for smooth operations and safety against hazard to the ship and its personnel.

Just recently, July 2010, CF Sharp was again the first in the Philippines and Asia to receive the MLC-2006 Certificate issued by DNV. This only proves that CF Sharp never stops in its commitment to quality service. We strive perfection in everything we do. We make sure that we meet the criteria of our business partners in providing them with the expertise they need to meet new requirements and challenges. 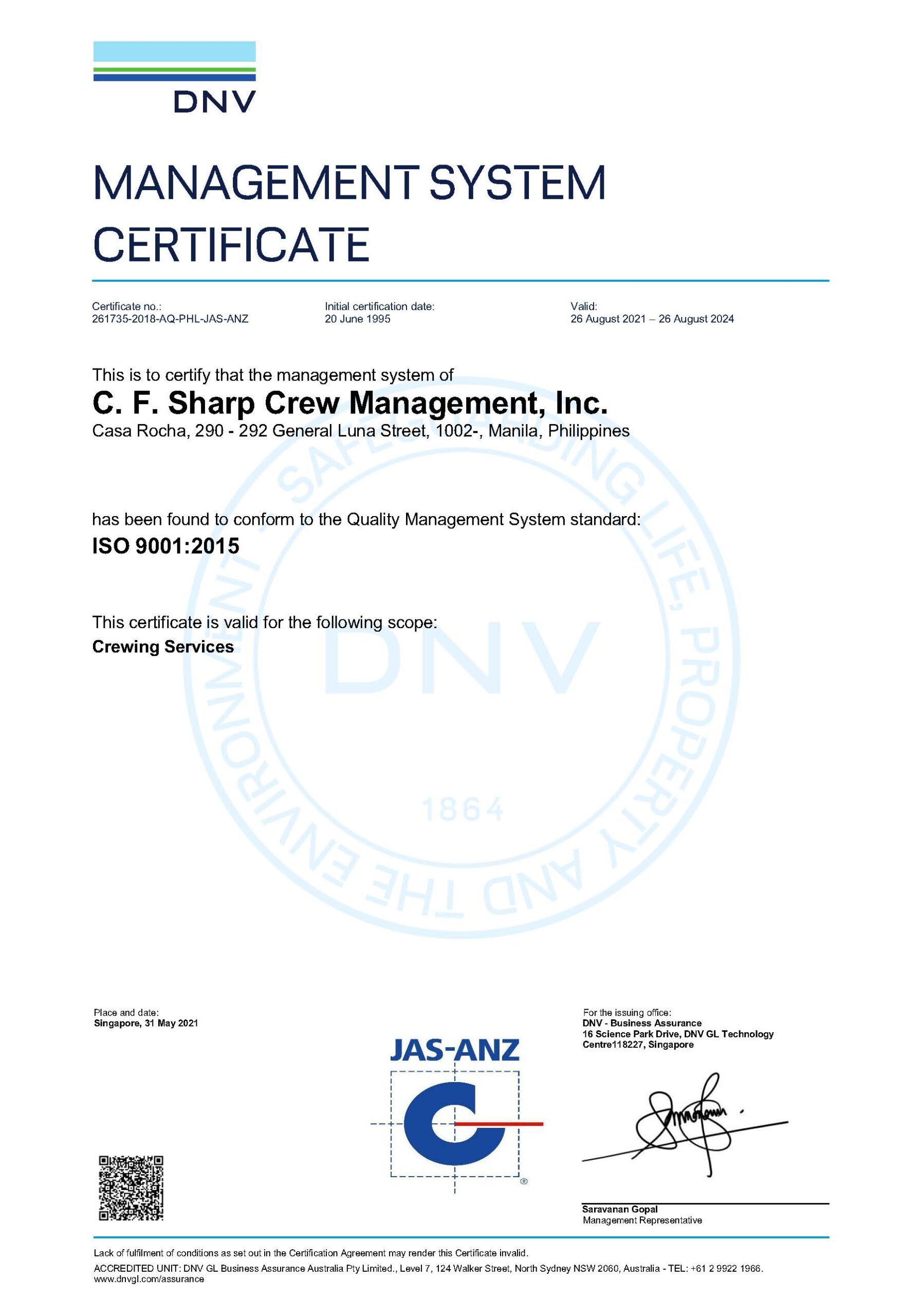 C.F. Sharp Crew Management, Inc. (CFSCMI) considers their obligations in respect to health and safety management to be of equal importance.

It is the policy of CFSCMI to undertake operations and service in such a manner as to ensure “so far as reasonably practicable”, the health, safety and welfare of its employees and all persons likely to be affected by its operations including the general public where appropriate. 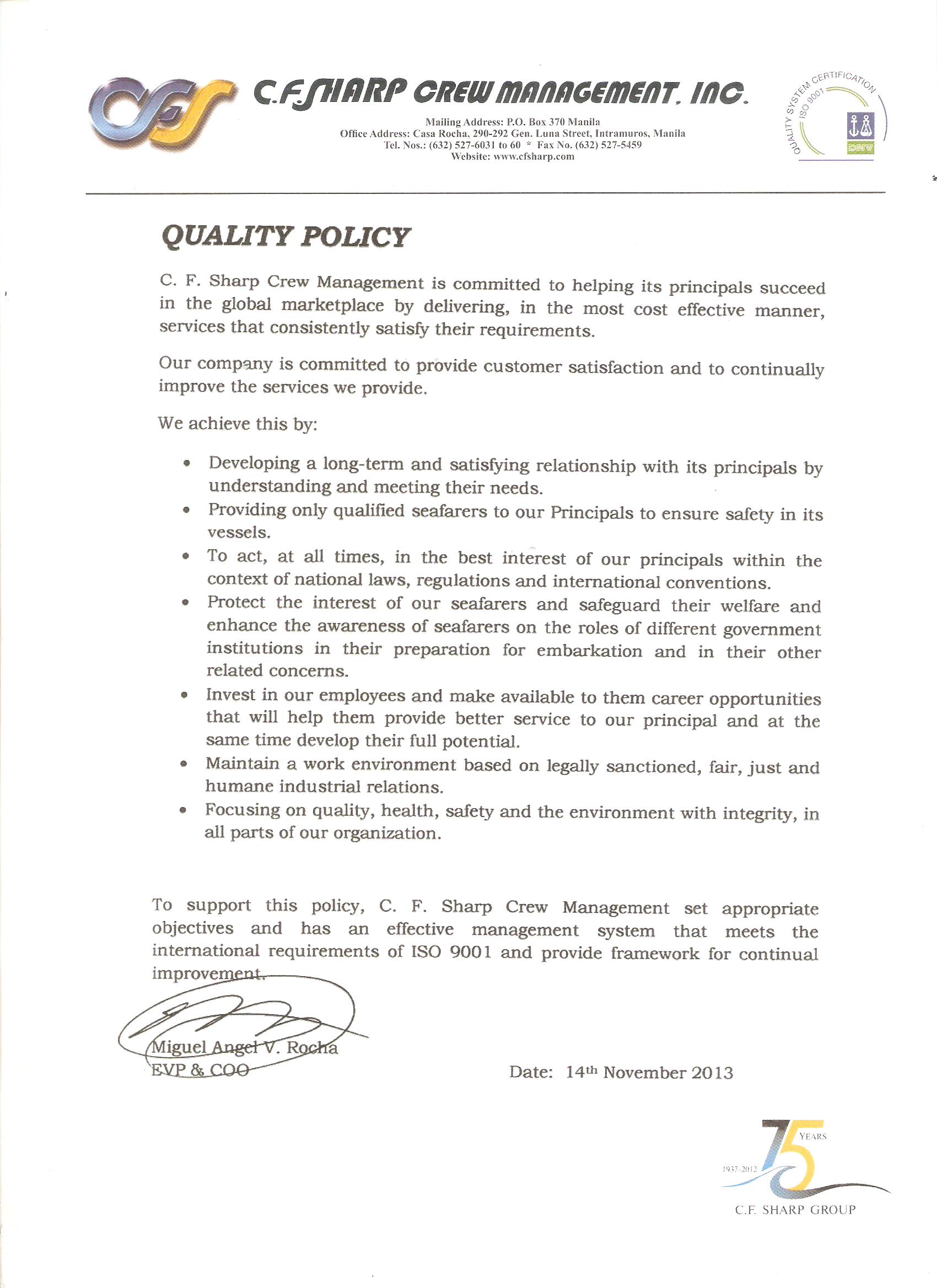 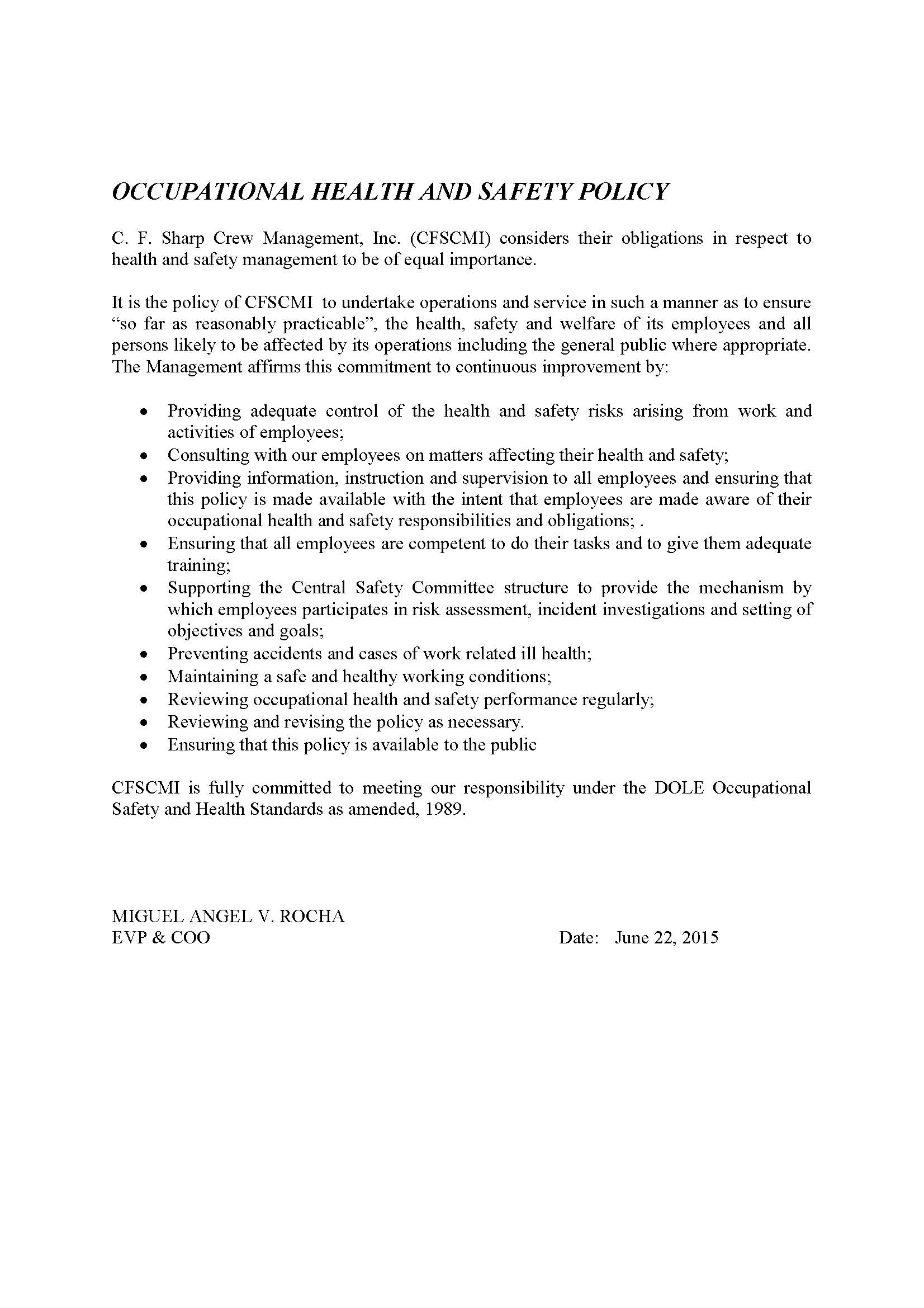 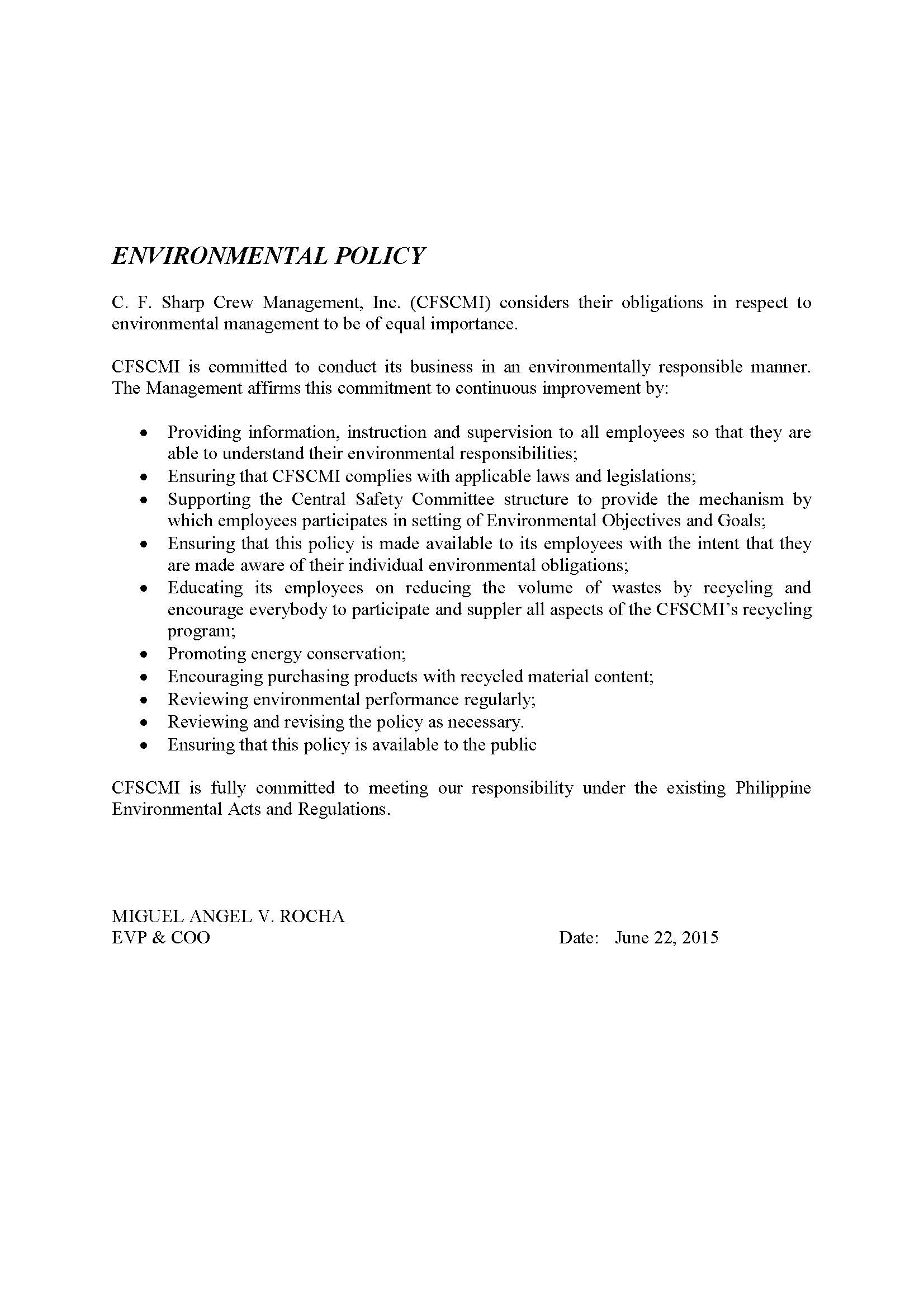 We recruit by developing existing source markets, forging partnership with maritime schools, likewise, with hotels and resorts for our hotel personnel requirements; by maintaining our retention rate of current pool at 97%, undertaking aggressive recruitment campaigns to further increase our reserve crew.

Our Crew Management Information System (CMIS) provides and maintains our highly automated operations, providing easy access on crew data with more than 30,000 seafarers, most of whom have been working with us since they first went to work onboard. We continually seek ways to further improve our systems and operations through innovative new technologies.

Authenticity of Certificates and Personalized Service

We provide guaranteed high level of certainty as to the authenticity of certificates in compliance with STCW and IMO requirements. We have also personalized our operational system – each of our principal has its own Crewing Manager who provides the day to day point of contact.

With our thrust to continuously improve the quality of seafarers we supply our esteemed principals, we have adopted a comprehensive PDOS that would serve as a guide and foundation for employment on board the vessels. The relevant sections are: Seafarers’ Empowerment, Seafarers’ Life Onboard, Behavior and Attitude, Stress Management Onboard, Safety On board, Conditions of Employment, Health Care and Prevention, Safety and Security, Allotment Procedures, Family Center Assistance and Travel Tips.

A new manning trend that we have developed in which we are a pioneer in the Philippines is the full management of non-Filipino Officers. Our service includes recruitment, documentation, training, coordination and scheduling and a wide range of other services. 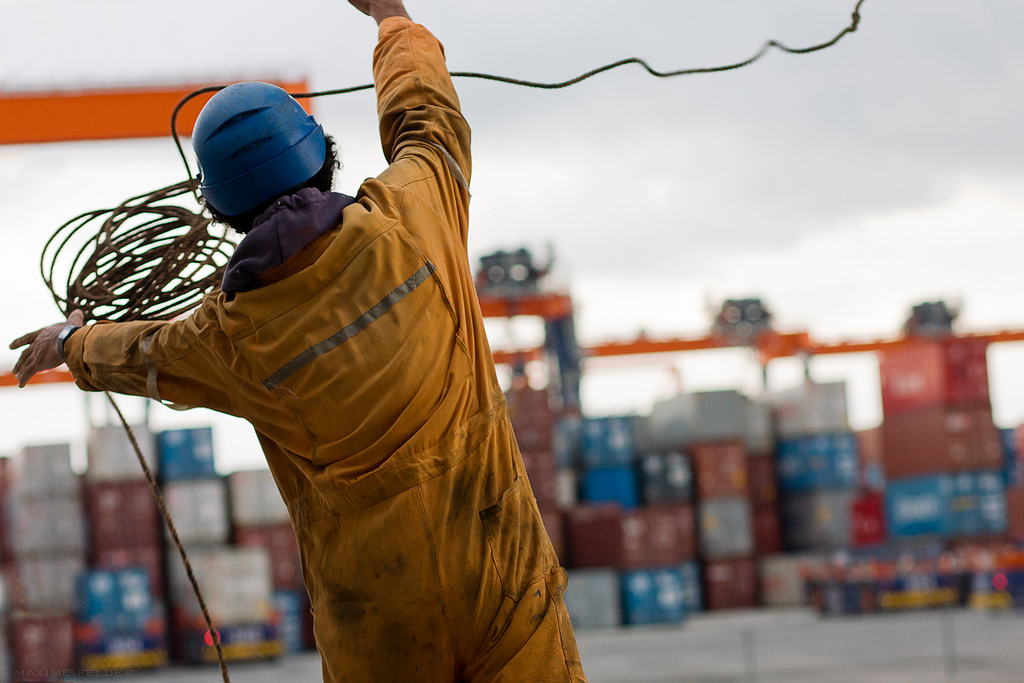 Filipino marine officers not in danger of losing licenses – Marina